You are here: Home / How AA is (Not) Organized

Tradition Nine states, “A.A., as such, ought never be organized; but we may create service boards or committees directly responsible to those they serve.” The structure of those committees in local A.A. groups, in Area 58 and at the General Service Conference level is shown in the diagrams below; more detailed information is available in the Area 58 Guidelines (Spanish version). Information on specific Area 58 committees and officers is available in several pages elsewhere on this site via the main menu. 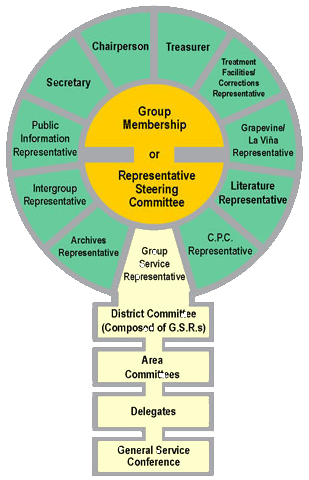 Most communities have autonomous A.A. Groups which conduct A.A. meetings and organize volunteers from their membership to help with a variety of service activities. A.A. Districts are composed of representative members from local A.A. groups (G.S.R., or General Service Representative), and a local District is coordinated by a D.C.M. (District Committee Member), These are rotating service positions. These local service entities form the base of the Conference Service Structure which guides Alcoholics Anonymous.

Larger metropolitan communities with the need for more services often have an Intergroup or Central Office, which provides facilities, phone answering, printed meeting schedules, and helps coordinate service activities. Intergroups and Central Offices work in conjunction and cooperation with the Conference Service Structure, but are separate entities responsible to their local groups, for both historical and practical reasons.

Areas such as Oregon Area 58, are typically state or province wide service bodies made up of G.S.R.’s, D.C.M.’s, Area Officers, and Service Committees. Oregon Area holds assemblies in the form of quarterly business meetings in various parts of the state, and does not maintain fixed facilities. We coordinate and help educate A.A. members in providing recovery resources. A delegate is elected which participates in the General Service Conference. 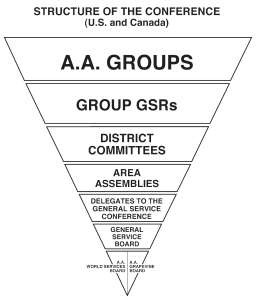 A.A. worldwide services, directed by A.A. World Services, Inc., are centered in the General Service Office in New York City, where 84 workers keep in touch with local groups, with A.A. groups in Treatment Facilities Facilities and correctional facilities, with members and groups overseas, and with the thousands of “outsiders” who turn to A.A. each year for information on the recovery program. A.A. Conference-approved literature is prepared, published, and distributed through this office.

A similar structure is replicated in many countries or regions around the world.